It was a more or less long planed weekend trip. This winter wasn't convincing temperature-wise so we decided to give it a try by the end of February. My friend Christian took couple of days off in advance and was jumping of excitement already a week before the trip.

We didn't quite know where we would go so I checked the map, looking for the parts of rivers or lakes that could be connected in order to make a round trip. There are many such possibilities here in Brandenburg but most of them depend on sluices and weirs which are, all of them, permanently closed from December to March. Not an easy task... We were a bit time-limited and didn't want to go from A to B and back because it's kind of dull (or at least I thought so).

Anyway, I found what I was looking for. Near Templin, some 80km north from Berlin, there are several lakes connected at one point. We could leave the car in the town and wherever we go we would be close to it in the end. 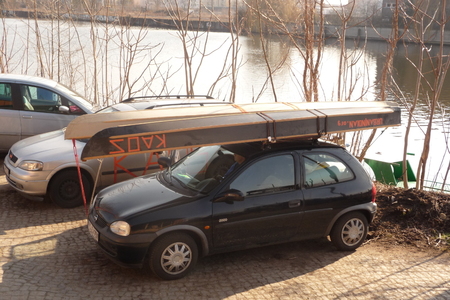 The classical start! The car is full and the boats on the top of it.

The trip was nice and easy. The worst part was getting out of Berlin (took almost an hour!) but once outside we had a lots of sunshine and plenty of beautiful countryside to look at.

We finally got to Templin and found the perfect spot to get the boats in the water, at Lübbesee. There was quite some ice on the lake as you can see on this photo (the white stripe in the rear, before the trees is also ice) but it was not thick, maybe a centimeter and a half and since I could easily crack it with my hand I said “No problems, let's go for it, piece of cake...”.                 Christian looked at me:”Are you sure?”
“Yeah, let's move because we need to find a place to camp on the other side and it's already dusk...” 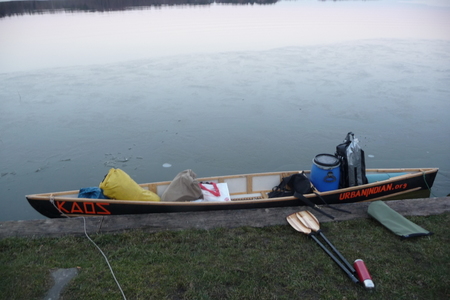 Silly me. It could have been a BIG mistake. Lowering the boats on the top of the ice was easy, but paddling them a completely different story. The ice may be thin but horizontally it forms a sort of one huge compact blade, supported by the water from one side and, believe me, it didn't sound nice once you rammed in it with your cotton boat. We did make it to the middle of the lake (there was not much ice on the way to that spot anyway, as you can see on the picture) and then we smartly decided to go back, pack our stuff, boats on the car and go for a bier in town while we take a look at the map again.

By the way, there was this guy, when we paddled back to the shore, who stood there and said:”I thought you guys were related to Nanook, when I saw you from afar...” So much for our ridiculous little expedition.

Once we ate and drank at a local “Gasthaus” our spirits went high again and we bent over the map. It was clear that we had to look for some running water where the ice couldn't build up by not so low temperatures at night (-1° to -2°C). We found, not so far away to the west, a nice bit of river Havel with no weirs in a 10km course so we decided to move there, find a place to camp and have a new start in the morning.

Finding a suitable place for a tent was not easy but we grilled our way to the late hours and afterwards slept happily on two mats and in two sleeping bags each, while it half rained and half snowed outside.

The next day was a really new start with sunshine and we gladly hopped into our boats and paddled off. No traces of ice this time. 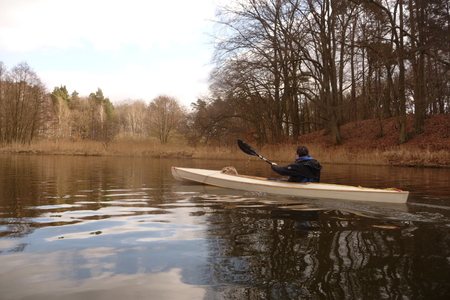 We didn't load the boats with all the gear since it was a short track to paddle (20km go and comeback). Just the kitchen and the food. A bottle of wine, of course. It was a beautiful day and we were injoying the full nature kick! No-one to be seen, not a single house or other structure anywhere near. The whole of it is a protected area and we could notice it by the wildlife activity. Foxes, deers, wild boars and a huge amount of rare-to-see birds such as Cranes, Barnacle Geese (I think) and Black Woodpeckers. Unfortunately I was not prepared to “shoot” the wildlife and my camera was most of the time in a roll bag. But our greatest delight was to observe a big beaver activity. Here's a perfect beaver nest we were able to see from quite close. Lots of fallen trees of bigger size showed quite some activity all along. Beavers themselves were nowhere to be seen since they are active at dusk and throughout the night. The landscape of reeds is the perfect living ground for many species. The weather was getting even nicer throughout the afternoon and Christian was enjoying his Covered Double as a single seater. And so we slowly approached the final part of our day. At the other end of this beautiful small lake is our end of track, where we shell light up a cozy fire, eat well, drink some wine and paddle the same way back... at night. A nice spot where we ended up. 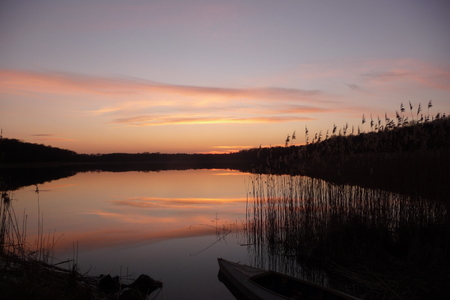 And what a great show, what a beautiful day it was...

Making a fire was a bit of a trouble, though. After a 7th attempt it still didn't light up. Mind you, I KNOW how to make a fire pretty well, but the rain last night had damped all the wood we could find close to this spot and, although the reeds were a very good fire starter, it just didn't work. We had to go get the wood somewhere else so, while I started cooking, Christian went off bravely, with my little hatchet, to the neighboring woods to chop off some dry pine from the fallen trees. Where we were was a sort of an island at the end of the lake and he had a long walk until he reached the forest.

Finally we had a nice fire going on and it was not too late because the temperature had dropped a big chunk in an hour or so. Basically, you would start feeling not really comfortable (to put it mildly) the moment you left the fire place.

“Hey Christian, do you think this little lake could freeze up before we start our way back?”
“Noooo, surely not... it's part of the river. River flows in it at our right and out of it on the other side to the left. We are good...”

At some time the wine was finished, we packed up, put the fire out (with tons of water) and entered our boats.

All looked fine and we paddled off into the starry night with moonlight, reflected in a perfectly still water. After about a hundred meters: Crashhh-screeeeech-cracklecrackle! I had just rammed into a thin ice. Not a lovely surprise. The lake DID start to freeze up in just couple of hours! It was much thinner ice than on the other lake and we thought we could make it through so we continued carefully in front. But it soon became clear that it was building up much thicker towards the middle of the lake. Then I remembered that it must be thinner or completely non existent on the right side of the lake, where the main river course must flow. We went slowly a bit back and then broke through towards the right side. After a while we breathed easier because I was right: there was almost no ice on that side of the lake. On we went, earnestly chopping the water, wanting to get out of the lake as soon as possible.

Almost there... couple of hundred meters more and we are in the narrow river again. But the ice had mounted up in that last part due to the current and we were aware of it soon enough. Full stop. Thick ice. What a f... are we gonna do now? We left our tent and all sleeping gear in the car, so no way of trying to spend the night somewhere here in the open. And while we sit and discuss the ice keeps building up. Well let's go in front and try our luck.

Smash-smach-crack-crack-rip-screech! We gave it all and we did well. We were in the fluent water again. I turned the torch to check the damage in the boat or see if there was any water in it. Not a single drop. The boats did just fine and proved sturdier than we thought in the beginning. Afterwards I found that a bit of paint was scratched off at the waterline on the bow but the cotton was undamaged. That was all.

Unfortunately there are no better photos than this one above, taken when everything was behind us. The rest of the trip went beautifully fine in a cold but moonlit and starry night. And for our delight and as a final prize for our persistence we had an army of beavers swimming and splashing the water all along the way. And yes, I did manage to “shoot” one: That was it for now. Once we reached the car, we decided that it was enough adventure for one weekend and that we would prefer to sleep at home than in a tent, since it was now not more than 60km away.

Stay tuned for more trip reports on our blog. I say good bye with this last epilogue photo. That's a really nice trip you had! A bit to cold and icy for my taste. But I'd love to join for one of those trips later in spring. nice one!